Older adults are some of the hardest hit by SARS-CoV2/COVI19 and they deserve our protection. Dr. Bowdish talks about the importance of keeping them safe during this epidemic.

Canada is repatriating citizens from Wuhan, China. Should we be worried that this will bring the coronovirus to Canada?
Dr. Bowdish talks to CBC about the risks of bringing Canadians home, what we can do to protect ourselves from infection, and reveals that there is a virus circulating in Canada right now with similar symptoms that has killed hundreds of Canadians and is expected to kill hundreds more (it’s influenza and you should get your flu shot).

Our research on the scavenger receptor MARCO was featured in an article “Air Pollution, Evolution, and the Fate of Billions of Humans” by Carl Zimmer in the New York Times. In this manuscript we collaborated with Dr. Brian Golding, an expert in evolutionary biology in order to understand the evolution of this macrophage receptor. MARCO (or macrophage receptor with collagenous structure) is expressed on macrophages where it binds bacteria and particles such as those found in dust and air pollution. We had hypothesized that because it is the receptor for two pathogens, Streptococcus pneumoniae and Mycobacterium tuberculosis, that have played a major part in driving human evolution, that we might find evidence of areas of the receptor that were undergoing rapid evolution to protect us from this pathogen.

In order to determine which regions of the protein were changing we performed a phylogenetic analysis of the sequence of MARCO from humans, our close ancestors, the Denisovians and Neanderthals, and primates. We found a few interesting things. There was one mutation, which we call F282S (282 refers to the 282nd amino acid in the protein, the F = phenylalanine and the S= serine), had changed very rapidly. All our primate, Denisovian and Neanderthal relatives had a serine residue in that position but fully 83% of the human genomes we analyzed had a phenylalanine. The fact that this mutation spread so quickly through the population means that there must have been very strong selection pressure. We cloned both variants and found that the human specific variant was indeed better at binding inert particles and bacteria. There were a few other interesting mutations we characterized (see article below) but the take home message is that some of the evolutionary adaptations we have made to deal with pathogens may have influenced our ability to handle air pollution or, since the savannah was predicted to be a dry and dusty place, the adaptations we’ve made to deal with particulates in the air may have changed our response to pathogens.

To read the full article, see below.

Dr Bowdish talks to Scott Thompson on  CHML radio about a recent survey suggesting that more Canadians have lost their trust in science. Are scientists elitist? What can scientists do to regain the public’s trust ? Listen to this clip to hear more…. 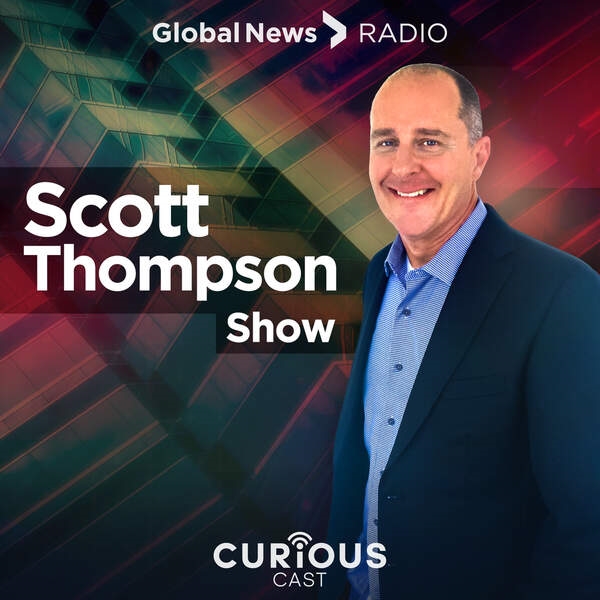 Dr Bowdish is the Canadian Lung Association’s spokesperson for World Pneumonia Day (November 12, 2018). Here she discusses the importance of being vaccinated for pneumonia….

She also speaks to Zoomer Magazine about pneumonia, vaccinations and the aging immune system here…

To get a sense of the other lung research going on in the Bowdish lab, see our Instagram page: house.macrophage

It’s a very serious illness, especially for #Zoomers @libbyznaimer talks with expert @MsMacrophage Dawn Bowdish, Chair of #Aging & Immunity @McMasterU to find out everything we need to know about #Pneumonia at 12 and we take your calls as well at: 416-360-0740 or 1-866-740-4740

Listen to the interview here.

On average, everyone takes an astonishing 22,000 breaths per day – something we’re not conscious of doing.  And, although breathing is fundamental to life, lung research doesn’t get the attention it truly needs.

November is Lung Month, the perfect time to reinforce and remind Canadians how important it is to #TakeABreather. To capture attention, invite participation and help raise donations for lung research, The Lung Association is launching interactive pop-up parks across Canada. 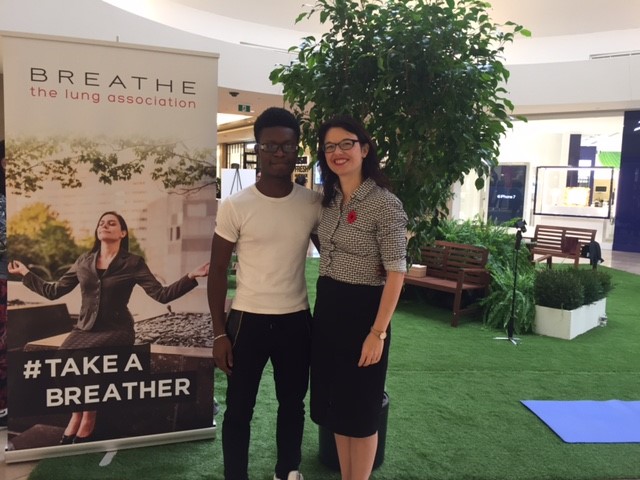 Joseph Neale is a “Breathing Ambassador” who survived lung cancer when he was only 20 years old. Despite having surgery he got his voice back and is hoping to win a “Grammy for Lung Cancer Research”. Together we answered questions at the #TakeABreather pop-up park at Sherway Gardens. Stories like his remind me that I need to be the best scientist that I can be to make the discoveries that will improve the lives of those living with lung disease.

Highlight’s of the kick off were livestreamed on Breathing as One’s Facebook Page – be sure to check them out! 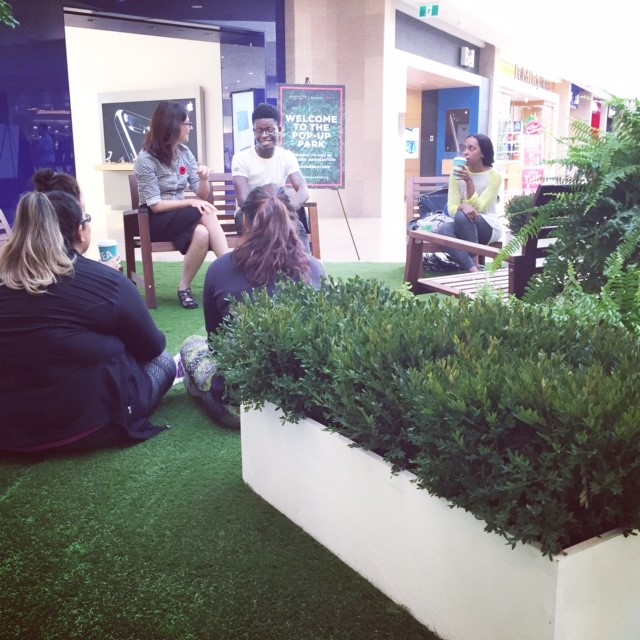 It was such an honour to hear Joseph’s story of overcoming lung cancer and to share what the research community is working on. We all agreed – more money for lung research!

Remember, everything shared with #takeabreather is being curated at breathingasone.ca – take a look and make your contribution today!

Don’t forget, there are three ways that you can get involved:

It’s time Canadians stop taking our breath for granted. Through Breathing as One and the #TakeABreather campaign, together, we can lead the conversation, and radically change the way we think about breathing.

Lessons from the oldest of the old.

Would you rather live a long life in poor health or a short life in good health? For most of us this seems to be the trade-off but for the select few who become “supercentenarians” (those living to > 110), they seem to have the best of both worlds. Intriguingly, these oldest of the old are usually of sound mind and physically active until their death, and avoid many of conditions or diseases that almost seem to be an inevitable part of old age such as cardiovascular disease, metabolic disorders or dementia. Most of us aspire to an old age like the supercentenarians, which is active and healthy but when ill-health makes its inevitable appearance, the decline is rapid but brief. So how do they do it? Genetics seems to play a role, but there is no magic gene that makes us live longer, nor is there a particular diet, exercise or pill that ensures that you’ll live into the next century. Interestingly, we’ve recently learned that having a healthy immune system may be necessary for long and healthy life.

One of the most provocative studies of the role of the immune system in longevity comes from the study of Hendrikje van Andel-Schipper who was, briefly, the oldest woman in the world. She died of cancer at 115 and donated her body to science. She was remarkable in many regards but from an immunological perspective, she was exceptional because at the time of her death her circulating white blood cells came from only two hematopoietic stem cell clones, as opposed to the thousands or tens of thousands one would expect in a younger adult. Since a diverse repertoire of white blood cells is required to repair damaged tissues and seek out potentially cancerous cells, this loss of stem cells may, ultimately, have caused her death. The oldest old have another interesting immunological feature – low levels of inflammation, which seem to help them resist chronic inflammatory diseases like cardiovascular disease and dementia for longer.

So what can those of us who have not won the genetic lottery do to live long, healthy lives? Although there are some pre-clinical trials in mice and epidemiological data in humans that suggest it will be one day be possible to extend the years of healthy living by taking a pill, we are not there yet. Instead, we can lower our inflammation and extend the years we live in good health by exercising, eating well, maintaining a healthy body weight, and having a robust social network. We may not have what it takes to be a supercentenarian, but we can make the years that we have be the very best that they can be.
Suggested article for further learning: New Scientist

LET ME AT IT!
-An immune-system macrophage (large) senses an intruder (zymosan)
...the chase ends in the macrophage enveloping and devouring it in the process of "phagocytosis"
📽️ credit: Heinrich & Lee #microscopy #bigdata #serverless #iot #linux #snrtg #openscience #immunology

PROPOSAL:
Goldfish snacks but in the shape of white blood cells
We can call them
Snackrophages

Anybody know where I can find pre-COVID era saliva? We have salivary IgA/G working for spike and RBD for acute and convalescents. Need a better control than age/sex-matched “presumed negatives” from the population. Feel free to DM me. Hopefully a BioRx post will follow soon.