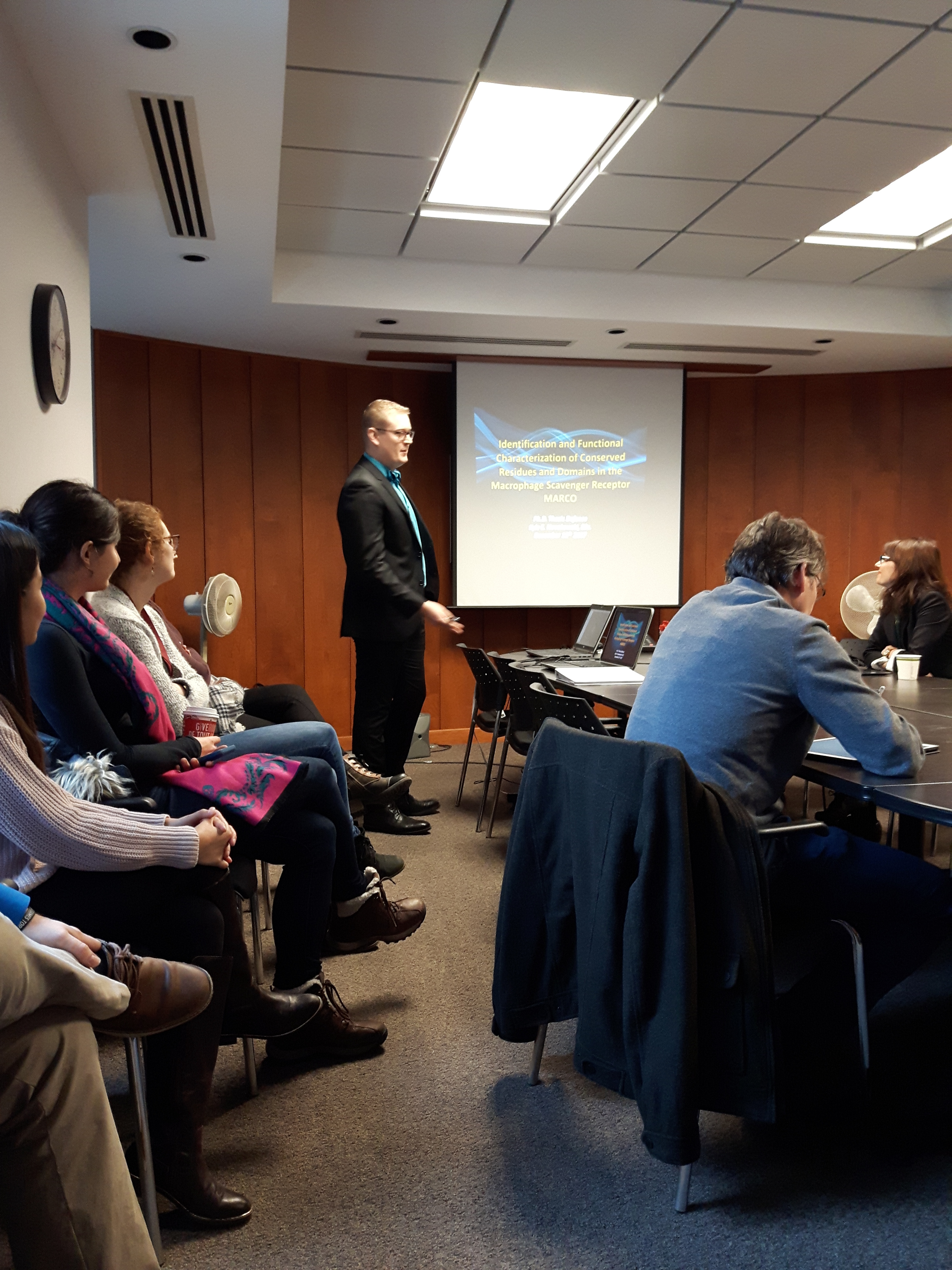 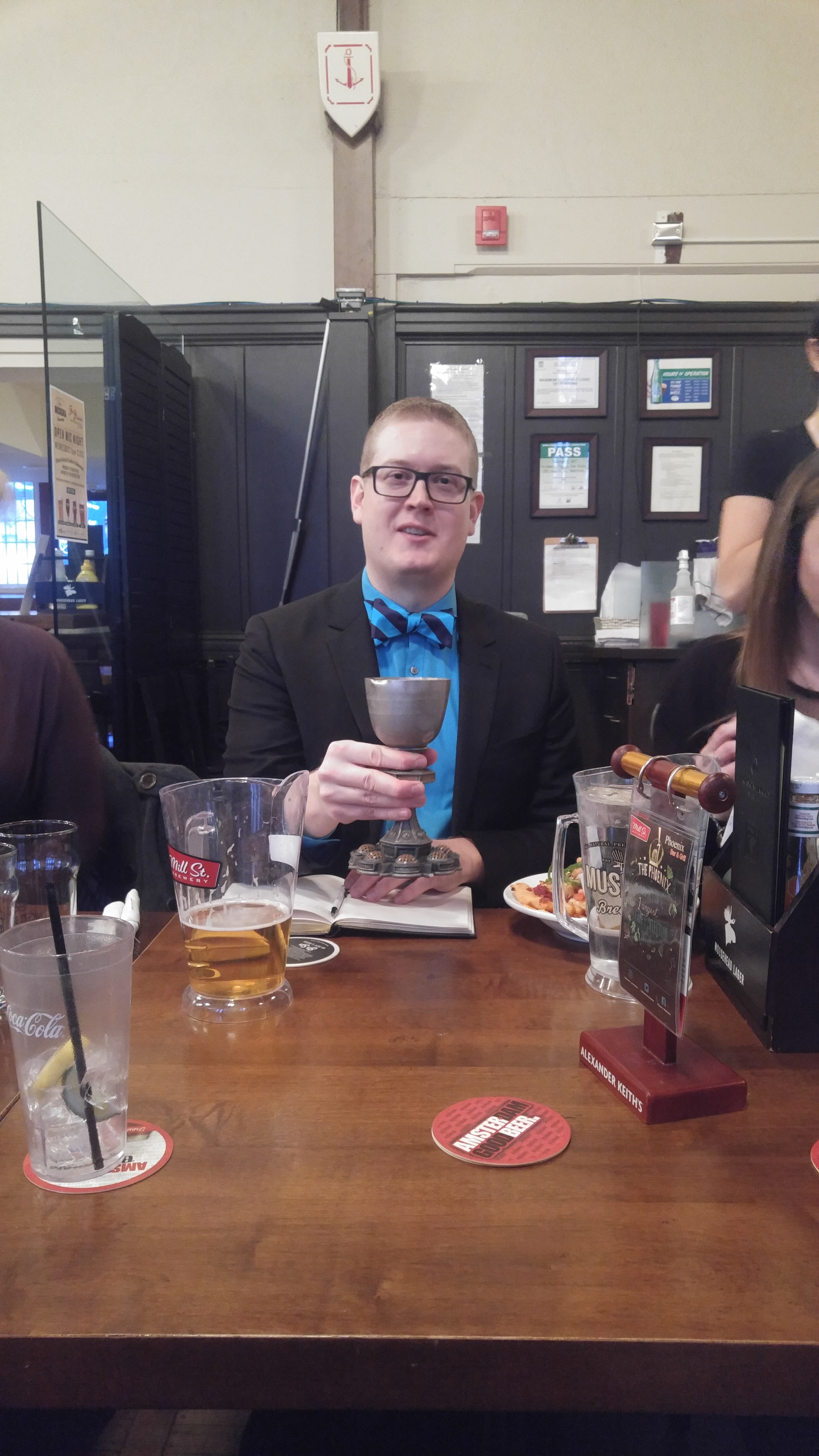 The Bowdish lab is thrilled to participate in NSERC’s “Science, Action!” video contest. An undergraduate team of videographers (Yung Lee, Karanbir Brar, and Tony Chen) filmed our lab discussing our NSERC funded work on discovering the evolutionary origins of phagocytosis. Please “like” and share our video to help us move on to the next level of the competition.

Our NSERC funding has been integral to the lab. This was one of the first grants that got the lab up and running and to date we have had 5 NSERC funded graduate students and 10 undergraduate students including 3 NSERC Undergraduate Summer Research Assistants in the lab. This funding has also been instrumental in developing new techniques, technologies and collaborations that have extended our research capacity.

What are we studying with our NSERC funded research?

Our NSERC Discovery Grant  entitled “Uncovering mechanisms of phagocytosis by class A scavenger receptors” allows us to use bioinformatics and molecular biology to understand the very origins of immunity.

Our lab studies macrophages, which are sentinel cells of the innate immune response. They patrol the body and engulf damaged tissues or pathogens and destroy them. This Pac-man like ability to eat microbes is called “phagocytosis”. We study a particular class of receptors that macrophages use to phagocytose called the scavenger receptors.

Phagocytosis is an ancient process that is central to defence and nutrient acquisition in single-celled organisms and embryonic development, clearance of modified host proteins and innate immunity in multi-cellular organisms. During phagocytosis a phenomenal amount of information is transmitted to the cell including the size and shape of the particle, its composition, and potential toxicity. How this information is transmitted is not really understood but is the focus of our work.

All the major discoveries in immunology (e.g. toll like receptors, intracellular sensors, signalling pathways) began with studies in comparative or evolutionary biology and my program of research continues this tradition. Indeed, the process of phagocytosis is believed to be the prototype function of the immune system as acquisition of nutrients developed into a mechanism of self- versus non-self recognition. The process of uptake is so ancient that it must have occurred prior to or in conjunction with the expression of protein receptors on the surface of the cell. The scavenger receptors, being primitive but effective uptake receptors may rely on membrane dynamics and lipid interactions more than their more evolutionarily recent counterparts (e.g. Fc receptors).  We use bioinformatics to study the genomes of ancient and modern animals to study how the scavenger receptors change over time. Parts of the scavenger receptor gene or protein that haven’t changed over time, are likely very important for function. We use molecular biology to uncover how these particular regions of the protein work.  Studying these processes will uncover novel mechanisms of signalling and contribute to our understanding of the cell biology of endocytosis and phagocytosis, which are processes integral to embryonic development, immunity, homeostasis, implant recognition and adhesion and consequently essential to many fields of biology.

Check out the other videos of the “Science, Action!” video contest here.

To read more about our NSERC funded work click here.

Do you work out? Cause you’re built like a rock! A rock like Dwayne “The Rock” Johnson! You have an impenetrable body thanks to your complex immune system. So how did you get such a sophisticated immune system?

In the Bowdish lab, we do more than just macrophage biology; we also study the evolution of the immune system! The scavenger receptors are a group of receptors that play an important role in your immune system by binding harmful bacteria. Our most recent publication by Yap et al., looks at how these receptors evolved and how evolution has changed their function. These receptors are found in various forms of life such as sharks, frogs, and mammals, but the function and appearance of these receptors has changed over time. Check out the open access….

Despite having multiple vaccines against Streptococcus pneumoniae available today, over a million people die each year due to pneumococcal infections. Mike Dorrington, a Ph.D. candidate in the Bowdish lab, is attempting to understand how to produce better vaccines by gaining a better grasp on how the immune system fights these bacteria. Mike has recently published a manuscript entitled “MARCO is required for TLR2- and NOD2-mediated responses to Streptococcus pneumoniae and clearance of pneumococcal colonization in the murine nasopharynx” in the Journal of Immunology. Mike’s work focuses on the importance of macrophage scavenger receptors in immune protection against S. pneumoniae, the most common cause of bacterial pneumonia. This manuscript provides us with evidence that Macrophage Receptor with Collagenous structure (MARCO), a class A scavenger receptor, plays an integral role in establishing and maintaining the appropriate innate immune response to the bacteria in its preferred niche, the nasal passage.

S. pneumoniae is a very common pathogen that causes fatal disease in children under the age of 5 (where it often causes meningitis) and adults over the age of 65 (where it most often presents in pneumonia). Before infectious disease occurs, bacteria colonize the nasal passages of individuals where they replicate. If the bacteria are able to persist for long enough, they will then move to the lungs, blood, or meninges and cause potentially life-threatening disease. It has previously been shown that the clearance of the bacteria from the nasal passages was dependent on an influx of macrophages to the site. These cells are able to internalize and kill the bacteria efficiently. MARCO is expressed by these active macrophages and has been shown to play a role in the recognition of the bacteria.

Mike’s work shows that mice who lack MARCO expression are unable to clear bacterial colonization in a timely fashion. This is due to a decrease in a number of innate immune functions. First, MARCO-deficient mice have significantly less recruitment of innate immune cells such as neutrophils and macrophages to the site of colonization. Without these cells, the bacteria are free to thrive and replicate in the nasal passage, increasing the chance that they will travel to further tissues and cause disease. MARCO-deficient mice also present with less inflammation than they’re wild-type counterparts, as seen by a paucity of pro-inflammatory cytokines and chemokines including, surprisingly, type I interferons (cytokines associated with antiviral immunity). These data are supported by experiments performed in vitro using macrophage populations from MARCO-deficient and wild-type mice. When these cells are stimulated with S. pneumoniae, the MARCO-deficient macrophages produce less cytokines and chemokines. These cells are also less able to internalize the bacteria, a key step in the destruction of the pathogens.

A potentially ground-breaking finding that comes from Mike’s work is that MARCO is able to modulate the activity of other important innate immune receptors. Mike has shown that NF-kB activation in S. pneumoniae-stimulated cells expressing MARCO along with TLR2 and its co-receptor CD14 is much higher than cells not expressing MARCO. This is also true of cells expressing MARCO as well as NOD2 when compared to those expressing just NOD2. As NF-kB is a central regulator of immune function, this represents a very important step in our understanding of antibacterial innate immune responses in the nose.

Mike’s work on MARCO will continue as he attempts to uncover the mechanism by which MARCO increases NF-kB activation by these other receptors. It is his hope to be able to apply these advances in the basic science to vaccine development in order to generate an effective strain-independent vaccine against S. pneumoniae infection.

The scavenger receptors are an evolutionarily ancient family of proteins required for host defence and homeostasis but teasing apart their function and even their structure has been challenging. The goal of this manuscript was to use evolution as a guide to discover how the class A scavenger receptor family was formed and to identify regions of conservation and hence probable functional importance for future study. Phagocytic receptors such as the class A scavenger receptors are integral members of the innate immune response, which is conserved in all classes of life and after reproduction and nutrient acquisition is probably the major most fundamental requirement for survival.

There are essentially only four basic mechanisms of the innate immune system – agglutination (e.g. lectins), lysis/neutralization (e.g complement, antimicrobial peptides), phagocytosis (e.g. scavenger receptors), and pro-inflammatory signalling (e.g. the toll like receptors). The fact that these processes are ancient and have been so strongly preserved is a testament to their importance. Of these, phagocytosis is likely the most ancient process and was probably adapted from its original purpose of nutrient ingestion . One might hypothesize that phagocytosis was truly the genesis of the immune system since our single celled ancestors had to distinguish  between “self” and “non-self” in order to distinguish between food and their own daughter cells.  From there phagocytosis became essential to fundamental processes such as embryonic development, pathogen recognition, and homeostatic clearance of senescent cells. Without phagocytosis, the transition to more complicated life forms could not have occurred.

Although there have been excellent evolutionary analyses of the lectins, toll like receptors and complement pathways, very little is known about the evolution of the phagocytic receptors. The class A scavenger receptors are an excellent example of these multifunctional receptors as they are involved in both host defence and homestasis. Since the phagocytic receptors in general and the scavenger receptors in particular are a diverse group of proteins,it has been challenging to understand how members within a group are related. Indeed, the first goal of this manuscript was to definitively demonstrate that the members of the class A scavenger receptors, which had been grouped together based on a ragtag combination of ligand binding and some degree of amino acid similarity, were actually a family at all.  Since we were able to trace a probable path of gene duplication and consequent functionalization, we are confident that the 5 members (SRAI/II, MARCO, SCARA3/4/5) are actually related.  Interestingly the class A scavenger receptors may have acquired their long stalk like form with a single scavenger receptor cysteine rich domain (SRCR) around the time of the evolution of fish since, although SRCR domain can be found in invertebrates and single celled organisms, we could not find anything that resembled a modern class A scavenger receptor in any genomes of evolutionarily more ancient organisms such as jellyfish, lampreys and insects.

Because elucidating the function of the specific domains of the scavenger receptors has been so challenging (even the function of the SRCR domain is unclear), ultimately we want to use evolution as a guide to which domains are functionally important (i.e. conserved). In this regard we found that there is a common conserved region in the collagenous domain, which in the type member SRAI, is believed to be the ligand binding domain. In addition conserved domains were identified in the cytoplasmic tail and the coiled-coiled domain. Future experiments will be performed to determine if these domains are necessary for structure, expression, cellular localization or phagocytic function. 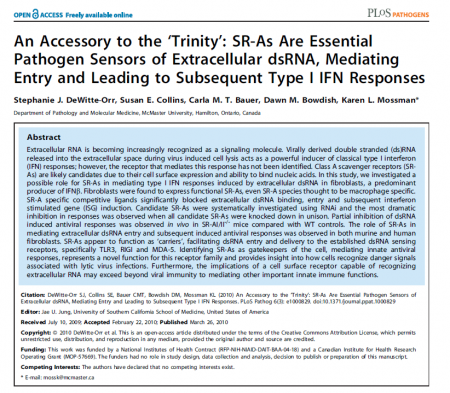 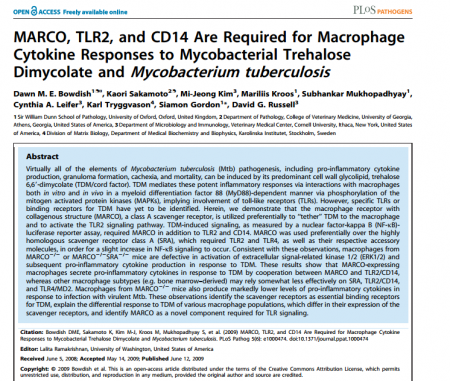 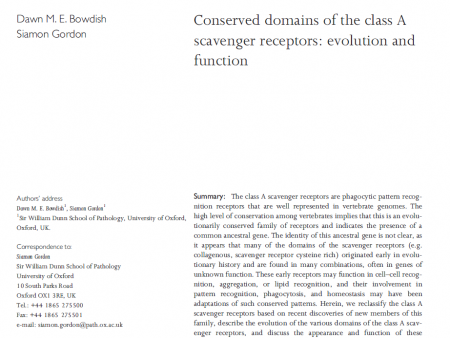 Adults' voices needed!
Are you 21 years or older and interested in contributing to COVID-19 research?
Click on the link below to learn about our study and complete the survey.
https://www.surveymonkey.com/r/HSMPN86
#COVID19 #guidelines #recommendations #knowledgemobilization #international