Despite having multiple vaccines against Streptococcus pneumoniae available today, over a million people die each year due to pneumococcal infections. Mike Dorrington, a Ph.D. candidate in the Bowdish lab, is attempting to understand how to produce better vaccines by gaining a better grasp on how the immune system fights these bacteria. Mike has recently published a manuscript entitled “MARCO is required for TLR2- and NOD2-mediated responses to Streptococcus pneumoniae and clearance of pneumococcal colonization in the murine nasopharynx” in the Journal of Immunology. Mike’s work focuses on the importance of macrophage scavenger receptors in immune protection against S. pneumoniae, the most common cause of bacterial pneumonia. This manuscript provides us with evidence that Macrophage Receptor with Collagenous structure (MARCO), a class A scavenger receptor, plays an integral role in establishing and maintaining the appropriate innate immune response to the bacteria in its preferred niche, the nasal passage. 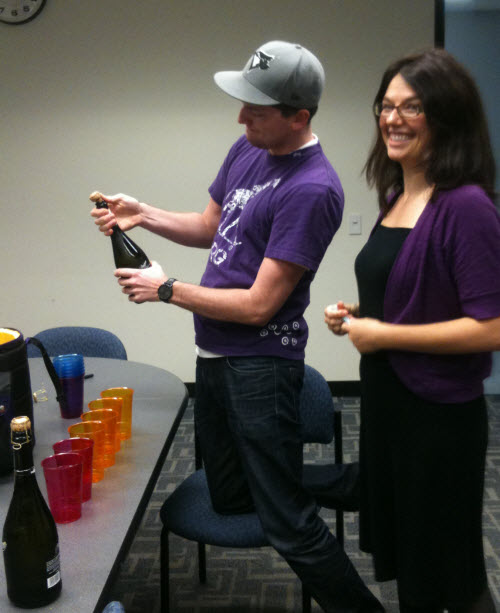 At the celebration of Mike’s first first author publication. Although Dawn is mostly happy for Mike, she is also slightly nervous that she might be about to lose an eye when the champagne is opened.

S. pneumoniae is a very common pathogen that causes fatal disease in children under the age of 5 (where it often causes meningitis) and adults over the age of 65 (where it most often presents in pneumonia). Before infectious disease occurs, bacteria colonize the nasal passages of individuals where they replicate. If the bacteria are able to persist for long enough, they will then move to the lungs, blood, or meninges and cause potentially life-threatening disease. It has previously been shown that the clearance of the bacteria from the nasal passages was dependent on an influx of macrophages to the site. These cells are able to internalize and kill the bacteria efficiently. MARCO is expressed by these active macrophages and has been shown to play a role in the recognition of the bacteria.

Mike’s work shows that mice who lack MARCO expression are unable to clear bacterial colonization in a timely fashion. This is due to a decrease in a number of innate immune functions. First, MARCO-deficient mice have significantly less recruitment of innate immune cells such as neutrophils and macrophages to the site of colonization. Without these cells, the bacteria are free to thrive and replicate in the nasal passage, increasing the chance that they will travel to further tissues and cause disease. MARCO-deficient mice also present with less inflammation than they’re wild-type counterparts, as seen by a paucity of pro-inflammatory cytokines and chemokines including, surprisingly, type I interferons (cytokines associated with antiviral immunity). These data are supported by experiments performed in vitro using macrophage populations from MARCO-deficient and wild-type mice. When these cells are stimulated with S. pneumoniae, the MARCO-deficient macrophages produce less cytokines and chemokines. These cells are also less able to internalize the bacteria, a key step in the destruction of the pathogens.

A potentially ground-breaking finding that comes from Mike’s work is that MARCO is able to modulate the activity of other important innate immune receptors. Mike has shown that NF-kB activation in S. pneumoniae-stimulated cells expressing MARCO along with TLR2 and its co-receptor CD14 is much higher than cells not expressing MARCO. This is also true of cells expressing MARCO as well as NOD2 when compared to those expressing just NOD2. As NF-kB is a central regulator of immune function, this represents a very important step in our understanding of antibacterial innate immune responses in the nose.

Mike’s work on MARCO will continue as he attempts to uncover the mechanism by which MARCO increases NF-kB activation by these other receptors. It is his hope to be able to apply these advances in the basic science to vaccine development in order to generate an effective strain-independent vaccine against S. pneumoniae infection.